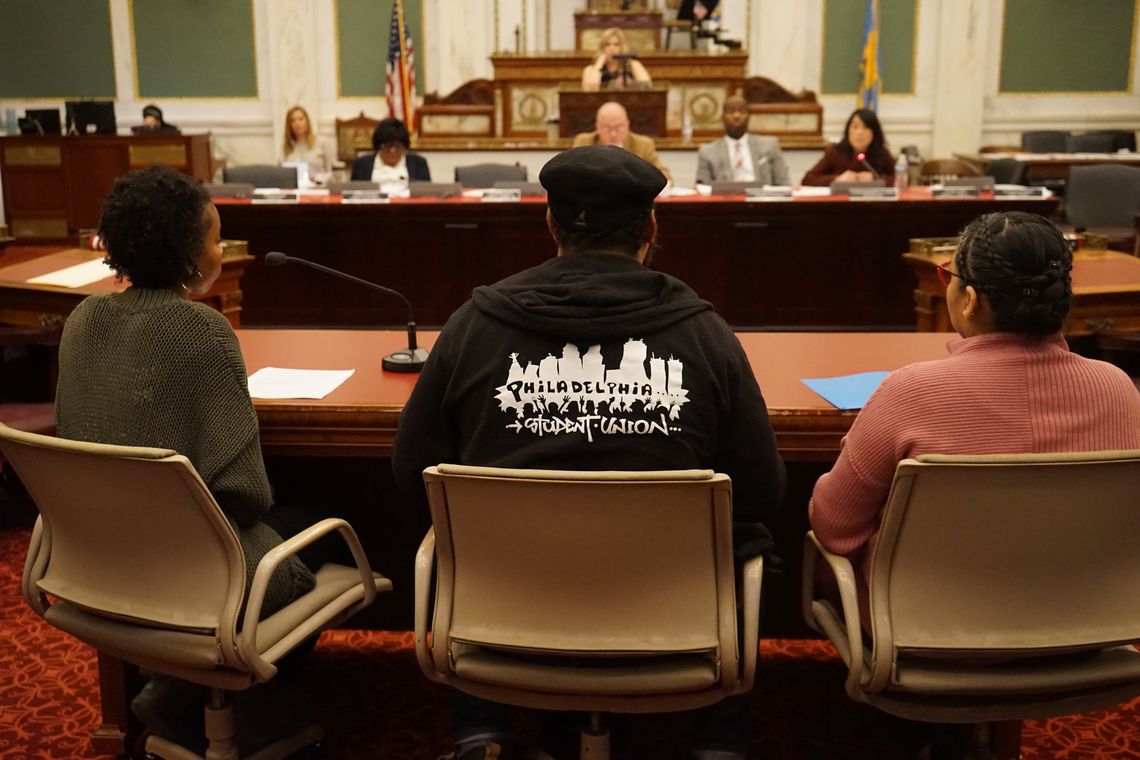 Philadelphia City Council members heard arguments from parents, activists, the Mayor’s Office, and the Philadelphia Federation of Teachers on school-related issues this week as they considered a formal process for nominating new school board members.

That will be another step in forming a locally controlled school board for the city after the vote Nov. 16 by the current School Reform Commission to dissolve itself.

Mayor Kenney has proposed that a nine-member appointed school board take its place.

Tuesday’s hearing began with the mayor’s chief of staff, Jane Slusser, outlining the logistics of the transition from the SRC to the mayoral-appointed board that governed before the SRC. The process represents a reversion to the city’s former charter.

First, the state secretary of education has to sign off on the abolition of the SRC by Dec. 31.

In early January, the mayor plans to announce his nominating panel, which will propose 27 people — three for each available board seat. The mayor expects to announce his appointments in mid-March, although the board members won’t take their seats until July.

The mayor also plans to submit his appointments to City Council for approval, based on the resolution that will guide the formation of the new school board. The resolution also creates a Parent and Community Advisory Council, which will convene at least twice a year to advise the board.

City Council will vote on the resolution in January, and if it passes, it will be on the ballot for voters in the May primary election.

Slusser said the individuals on the nominating panel will represent certain types of organizations — for instance, the Chamber of Commerce and community groups.

Nominees to the school board must be at least 18 years old, residents of the city, and registered to vote. People interested in serving on the board can get in touch with the Mayor’s Office. A period of public outreach to find other nominees will extend until March.

Councilwoman Blondell Reynolds Brown said she’s been meeting with her constituents about the new board for months.

“One of the repeating ideas is the importance of parent participation and representation,” Brown said. “We’ve done our research on best practices around the country, and reserving a seat for a parent is one of those best practices.”

Slusser agreed about the importance of involving parents, and parents and activists reiterated the point in their testimony throughout the morning.

“When we send those names to Council, hopefully there will be not just one, but more than one parent on the board,” Slusser said.

There is no formal requirement for that practice, however, so future mayors could abandon it.

Councilwoman Jannie Blackwell wanted to know whether current SRC members could be appointed to the new board.

Slusser said that nothing prevents the nominating panel from choosing sitting SRC members, so long as they had already resigned from the commission. She gave no indication, though, that the mayor was considering this.

At one point in the hearing, Councilman Curtis Jones said he was tired of all the talk about budgets and governance. As he questioned Hillary Linardopoulos, a legislative representative for the Philadelphia Federation of Teachers, Jones wanted to hear a moral argument in favor of local control.

“I had an experience with one of my former students who I taught in kindergarten,” Linardopoulos said. “Elijah. He’s now 17 and he’s in significant trouble with the law. I read about him in the newspaper.”

Elijah was charged with a crime and sent into the foster care system.

“It would have been much easier to get Elijah the help he needed when he was 5 years old in my classroom,” Linardopoulos said. “We as a society failed Elijah. … We’re now going to be dealing with the aftermath of not helping Elijah for the rest of his life.

Jones said he “really needed to hear that” and asserted that 90 percent of foster kids in the city are from just 11 of the city’s 48 zip codes. “Those are some of the same zip codes where we closed 23 schools.”

Councilman Derek Green pointed out that abolition of the SRC does not relieve the state government of its responsibility to fund Philadelphia’s schools — a point reiterated by many of the Council members present.

Councilman David Oh wanted to know whether the Philadelphia Federation of Teachers supports returning the city’s Parking Authority to local control because the agency failed to provide the revenue for schools that was promised as justification for the state takeover. Linardopoulos said the union had not yet taken a position on that. At the moment, it is calling for a state tax on fracking in the Marcellus Shale region to help fund public schools.

A complaint echoed by several parents during the two hours of testimony was about how the SRC and the District have dealt with special education students and their families.

Anna Perng, a parent of two children with disabilities, testified that she had to sue the District to get appropriate special education services for her autistic child.

“We often hear that there is no money,” Perng said. “But the SRC has annually approved the School District’s request to pay millions to private law firms to fight families like mine in court.

“We were battled every day, minute by minute, for every therapy that our kids need. We should examine that law-firm budget that gets approved every year and look at how to invest that in special education instead.

“If budgets are moral documents, what does it say about us as a society that instead of investing in special education, we’re paying private lawyers?” Perng asked. “Our school district has become an ATM for privatizers, big law firms, and corporate interests. … While I thank the SRC for its service, its existence has created a vacuum for accountability.”

Julien Terrell, executive director of the Philadelphia Student Union, said that forming a new school board is “only the first step.”

“We want students to be involved in their education, and there’s going to be a shift around decision-making. That shift should not be made without [student] involvement,” Terrell said. “Not only do we need a clear and transparent process, we have to be mindful of who’s on this board and who we’re claiming to be [education] experts. … Students should be [on the board]. Parents are the best advocates a child can have.”

Terrell took particular issue with a clause that stipulates that school board nominees must be at least 18 years old and registered to vote. That seems to exclude students. Not only are people of color and people living in poverty disproportionately likely to be unregistered, but undocumented immigrants can’t register.

Councilman Greenlee said that the state law requires school board members to be at least 18.

“Right now, decision-making power over our schools is being moved to Philadelphia,” Terrell responded. “This is what the work now requires: bold leadership. Not just in City Council, but for you to talk to your counterparts in the Statehouse.”

Olivia Vasquez, a community organizer with Juntos, read the testimony of a youth leader at the organization who was not able to attend because the hearing was held during school hours.

“Myself and members of my family are having our voices silenced in making decisions about my education,” Vasquez read. “My family is mixed status. This means that some of us are undocumented, and some are not.”

She called the language requiring board members to be registered voters “arbitrary” and “unjust” before urging Council members to change the requirement.

A copy of the resolution aquired later Tuesday night proposes to eliminate that requirement.

Antoine Little was one of the last to testify. A parent of six public school students over the years, Little is an activist with the 215 People’s Alliance and chair of the Our City Our Schools campaign — a coalition of grassroots groups that spent the last year pressuring the mayor to dissolve the SRC.

The campaign is now pushing for a “People’s School Board,” with parent representatives from around the city.

“A People’s School Board should be made up of parents and educators. The end of conflicts of interest. No more profit off our children’s education,” Little said. “We believe our students should have voting power. All parents, regardless of documentation or voter registration, should be eligible for the board.”

The Rev. Gregory Holston went even further. Holston is executive director of POWER, an interfaith group that brings together activists from more than 60 congregations. Holston and POWER’s education activists worked with Our City Our Schools to push for an end to the SRC.

Holston came out swinging for an elected school board.

“The simple right to vote for our school board is a right that every other school district in the state of Pennsylvania has,” Holston said. “I stand here with all of POWER backing that position.

“Anyone who believes that just ending the SRC means real change is going to happen is living in a fantasy world. The school board wasn’t good before the SRC. The schools weren’t good before the SRC. No one wants to move from the SRC to a concentrated board controlled by just the mayor and the Council. We want to see the opportunity for democracy in action. We want to see, every two years, school board members being elected and having to stand before the city of Philadelphia and account for their actions.

“Don’t make the SRC seem like the devil when the problem is democracy in this city. We don’t have a democratic way to hold accountable the people who are responsible for the education of our children.”

Holston challenged City Council to put in language that would allow the city and the voters to make this choice.

“If you think that this [mayor-appointed board] is definitely the right thing to do,” he said, “then take it before the voters and make your argument. Don’t hide in this Council, but go out before the people and ask them what they really want.