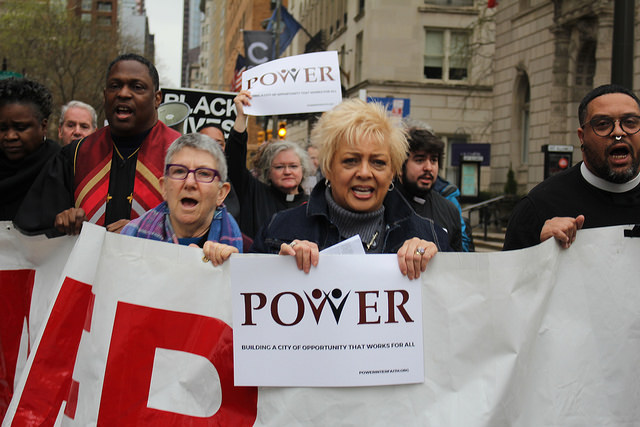 As they work to close the gap where public programs have not been able to support the city’s underserved communities, Philadelphia churches know, intimately, the needs of Philadelphia’s population that lives in poverty, attends underfunded schools or seeking affordable housing. As a result, they also serve as vocal figures in the city’s politics.

“An essential role of the government in this matter, for which the church must agitate, is the dismantling of the institutional structures and systems of oppression that bear down upon people of color,” said the Rev. Renee McKenzie, Ph.D., Senior Pastor of the historic Church of the Advocate. “The failure of the government in taking a leadership role in systemic change creates the necessitate for the church to respond in a robust way to address needs caused by the institutional structures, e.g. white supremacy, poverty, mass incarceration, etc. within which we are forced to live our common life.”

As pastor of the Advocate, which is located in one of the city’s five poorest zip codes, McKenzie oversees several social services, including but not limited to after school programs, resource office, computer access, food vouchers, a clothes closet and daily meals open to the community. As part of activism groups Philadelphians Organized to Witness, Empower and Rebuild (POWER) and Stadium Stompers, the Advocate pushes elected officials to address social justice issues.

“Historically the Advocate has had good support from our local representatives. [But] currently our community is mounting strong resistance to Temple University’s proposed football stadium and the amount of support expressed or demonstrated for the concerns of the community in this matter has, among some elected officials, been tepid at best,” McKenzie said.

“Generally, it strikes me that the state of affairs in our community, the unchecked growth of off-campus student housing, the continual erosion of affordable housing, the failed public schools, the presence of unresolved or unaddressed trauma and a collective failure in demanding that Temple University be held accountable for its failed relationship with the community are evidence of long-term systematic neglect by the elected representatives of this community.”

An activist coalition of different faiths, POWER was established in 2011 and has advocated for people living in poverty, workers’ rights, education, environmental and criminal justice. One of their most effective struggles resulted in city council passing a minimum wage increase for contractors and subcontractors in 2014.

With a force of 65 member congregations and an estimated 8,000 to 10,000 individual members, they’ve prayed with and anointed employees at McDonalds; been arrested for sit-ins at hotel lobbies; marched throughout the city and convened at the state capitol. In the midst of this work, they also conduct regular voter engagement activities.

“In 2014, we did a major voter engagement campaign. We engaged 1,000 voters. In 2016, we drove thousands of voters to the polls. For the 2017 district attorney’s race, we made over 200,000 phone calls, 32,000 live conversations,” Holston said. “[And] because we’ve done that kind of work, we have a lot of politicians talking to us around issues. The doors have been open to us more than ever in the history of POWER — that’s city, state and congressional.”

Even so, Holston said it is difficult to get some legislation passed that would benefit underserved communities.

“We are working at the state level to raise the minimum wage for everybody to $15. That’s much tougher because Republicans … won’t even let these bills come out to be voted upon” he said, also noting a “fairly and fully funded public education” formula as a struggle.

Regarding city policy, Holston said leaders have not been responsive to certain suggestions, including a list of recommendations POWER developed after hosting a series of poverty summits in 2016.

“Some of those [recommendations] were state related but most of them were things that could be done by the city and they haven’t done any of them. Some [council members] said they were not practical or they don’t want to do it. Some we haven’t gotten an answer for,” he said.

“They can start a Philadelphia public bank, so investments can be brought back to Philadelphia and we can invest in small businesses. They can encourage the use of worker cooperatives where we have food deserts in North Philadelphia. When we have a city with 185,000 people living in deep poverty, that’s a state of emergency and all city leaders should have accepted our recommendations and put all those recommendations into action two years ago.”

The Rev. Leslie Callahan, senior pastor of St. Paul’s Baptist Church, said “affordable housing,” is an issue that needs to be prioritized. “We don’t have enough of it,” she said. “It has to become a priority for people who care about the city of Philadelphia. We have more poor people than we have places where they can afford to live.” St. Paul’s is located at 10th and Wallace streets and Callahan described the neighborhood as including people who live comfortably and others who are living in poverty.

“Generally, the vast majority of people who are part of our congregation see voting as a useful tool,” she said. “There is a fair amount of suspicion in politics. I hear it more in the community — in general conversations. What i say is, ‘just because you don’t have a tool that isn’t a cure all, you don’t take it out the toolbox. I also remind them to vote locally because of the way local elections have a direct impact on the quality of life.”

The Rev. Alyn E. Waller, senior pastor of Enon Tabernacle Baptist Church, named funding for public education as an issue that should be a priority for state legislators and added that the next congressperson for Philadelphia should be someone who can make changes, even in the Trump administration.

“We need to send people to people to office who have a proper education agenda and we need to be holding them accountable,” Waller said. “At the congressional level, we need to win back seats and send people who can fight against Trump and bring this country back to center.”

As the largest church in the city and with 97 percent of adults registered to vote, Waller said elected officials and candidates do seek support from Enon, but that he does not endorse candidates from the pulpit, nor acknowledge them during service.

“I believe in political engagement, I believe in voter education, but I don’t believe in campaigning on church time,” he said. “I don’t tell people who to vote for but I regularly raise the issues. I can tell you what’s important in this election.”

Along with voter registration, Waller said that “voter education” and “voter mobilization” are also important and on April 24, Enon will host a voter education forum.

But as much as he encourages the congregation to be civically engaged, Waller also stresses other key factors to move the culture forward.

“Voting alone won’t fix our problems. Voting alone is not the panacea to fix the African-American community,” Waller said. “It’s also an economic issue. It’s good to get to the polls. [But] if we are going to fix what’s going on, we have to get economically involved. We’ve got to build, we’ve got to support people who support us and recognize the next phase to freedom for us is economic justice.”