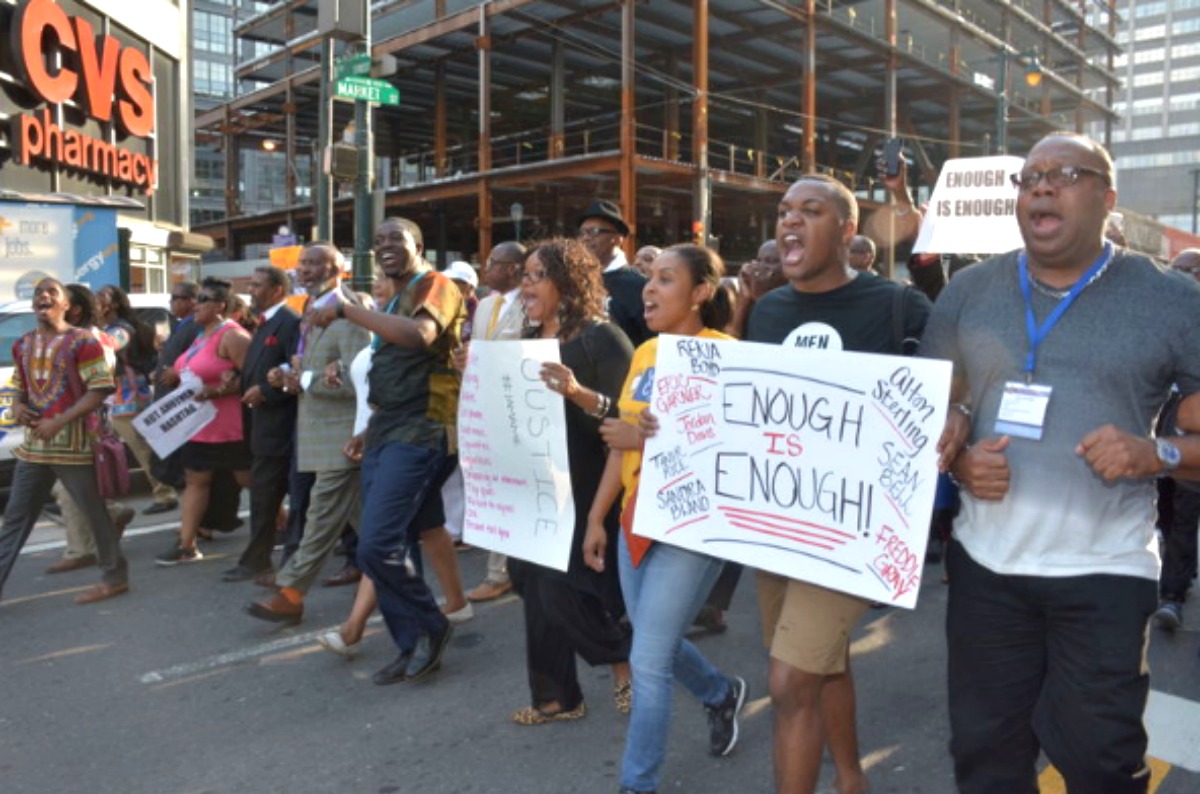 By POWER InterfaithJuly 11, 2016No Comments

Following the police killings of two Black men within 24 hours of each other in Minnesota and Louisiana, about 1,000 Black pastors, organizers and families demanding justice for Black lives shut down rush-hour traffic in Center City on Thursday.

Parishioners of the African Methodist Episcopal (AME) Church, including women in heels, locked arms with the clergy as the protest proceeded along Broad, Arch and Market streets.

The demonstrators sang gospel songs, including “Ain’t Gone Let Nobody Turn Me Around” and “Whose Side are You on My Brother,” as they were led by an organizer from Philadelphians Organized to Witness Empower and Rebuild (POWER).

Sweating and passionate, marchers pumped their fists in the air and shouted chants of “No justice, no peace,” “Black lives matter,” “This is what reality looks like” and “[No] killer cops,” as thousands of bystanders looked on or shot video on their phones.

Video footage of the incident in Baton Rouge, La., shows Alton Sterling being pinned to the ground by two white police officers, one of whom proceeds to shoot him while Sterling is still on the ground.

Minnesota school worker Philando Castile was shot four times by an officer during a traffic stop, while his girlfriend recorded the aftermath and later shared the video on Facebook.

The two fatalities moved AME organizers to march in the midst of their 200th general conference, which, in part, is centered on social justice. Pastors marched in their three piece suits, ties and leather dress shoes, as the sun beamed at 90 degrees in the early evening.

“This is one step in a much larger fight,” said the Rev. Mark Tyler of Mother Bethel AME Church. “I’m really in mourning and I’m trying to fight the feeling of being numb. But I’m happy I’m surrounded by people that push one another.”

A mother and grandmother of Black boys, Annette Smith, from New York, said she was marching for a better future for her grandchildren.

“It makes you want to make sure this world is equal,” she said. “We want to bring awareness.”

Bishop John Bryant, senior bishop of the AME Church said the march is inseparable from the AME roots.

“I feel it is extremely appropriate,” he said. “We started out as a protest and here we are still fighting the demon of racism. It’s not enough to sit in comfortable churches [in] solemn prayer.”

“We are here to resist and to let our voices be known, to respond to the police brutality that’s plaguing Black communities across the country,” said the Rev. Stephen Green, with the AME church and the national director of the youth and college division for the NAACP. “We stand in solidarity with our brothers and sisters in Minnesota and Baton Rouge as they continue to grapple and face this disheartening and tragic encounter. The AMEs and the NAACP stand boldly to create a world where justice flows like rivers and we engage in nonviolent reactions across the country. We will replicate this throughout the nation.”

Green said “after watching the video of the second death, we had to respond today and we did so this morning.”