Live Free is working to end the scourges of gun violence, mass incarceration, and the criminalization of Black and Brown bodies that tears at the soul of our society.

Learn about our partners

POWER is a member of The Partnership for Working Families, an organization that works to renew metropolitan economies across the nation.

POWER is independently financed.  We operate with dues from member congregations, grants from charitable and faith-based foundations, grassroots fund raising and contributions from people like you who care about our city and want to see change.  As a matter of principle, POWER takes no financial support from government entities.

We appreciate your one-time donation, or to become a POWER “Sustainer”, a recurring donation of $50/month.

In addition to being a POWER leader in your congregation, you can offer your time and talents to POWER in the following ways:

Email info@powerinterfaith.org for more information or call the office at 215.232.7697.

Interested in learning more about how to build leadership within your congregation, amplify your prophetic voice, strengthen community and address the issues impacting your people?

Then give us a call.

We are looking forward to the conversation.

Resources for the May 17th Primary Election 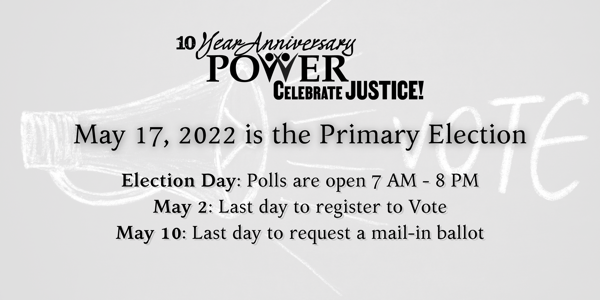 POWER Interfaith is a non partisan organization that does not endorse candidates. Our primary goal is to ensure our members have all relevant information as they participate in democracy.
Click on the following Link for responses from Candidates who are on the ballot! PA Primary is on May 17th, polls are open from 7 AM – 8 PM. Visit Vote.PA.Gov for polling locations.
View Candidate Responses

LIVE Free has also compiled the list of candidates who are running in the upcoming Primary Election along with contact information.

LIVE Free has compiled the list of candidates who are running in the upcoming Primary Election along with contact information. Check back for answers to a survey we provided to all candidates.

Information from Vote.Pa.Gov, the official website for election information in the state of Pennsylvania.

In Pennsylvania, you can only vote for the candidates in the same political party you have named in your voter registration. For example, if you registered to vote as a member of the Republican Party then you can vote in the Republican primary, but not the Democratic primary.

All voters can vote on:

Submit your comments to our Video Montage!

LIVE Free is creating a video montage for Making Philadelphia Safe through a budget that dreams bigger.

Other than getting guns off the street and adding police, what would you suggest that the budget needs to invest in to make Philadelphia truly safe? It can be whatever you want, so let your voice be heard! Briefly tell the City Council and Mayor where we should put our resources so that our city is safe for all.

POWER’s work to end police violence and mass incarceration is organized as a local chapter of the national Live Free Campaign of Faith in Action, a national network of faith-based community organizations working to create innovative solutions to problems facing urban, suburban and rural communities.

With over 118 million people attending weekly services in over 350,000 congregations across the U.S., we believe that a social justice revival within our faith institutions would transform our nation’s hearts and minds, and ultimately, the policies and practices that perpetuate these evils. With hundreds of congregations as well as countless leaders and movement partners throughout the country, the LIVE FREE Campaign, both here in Pennsylvania and nationally, is working to end the scourges of gun violence, mass incarceration, and the criminalization of Black and Brown bodies that tears at the soul of our society.

As people of faith, we know that our country’s legacy of racism, violence, and economic exploitation runs counter to what is prescribed in our most sacred texts. Sadly, the wealthiest and most powerful nation in the world is also one of the most violent and punitive. With almost 12,000 gun murders a year (more than the annual death toll of U.S. soldiers during the Vietnam War) and the highest incarceration rate in the world, we find ourselves in a moral crisis—a crisis which disproportionately impacts the poor and communities of color.

POWER’s Live Free efforts in Philadelphia and Pennsylvania have made progress in a number of areas:

The road to ending police violence and mass incarceration runs directly through Pennsylvania cities like Philadelphia and Allentown. While Live Free attempts to influence federal and state policies whenever possible, its primary focus is on ensuring that prosecutors, police chiefs, mayors, city council members, and other elected officials are held accountable as allies, and not obstacles, to criminal justice reform.

Our Live Free chapter is currently working to: