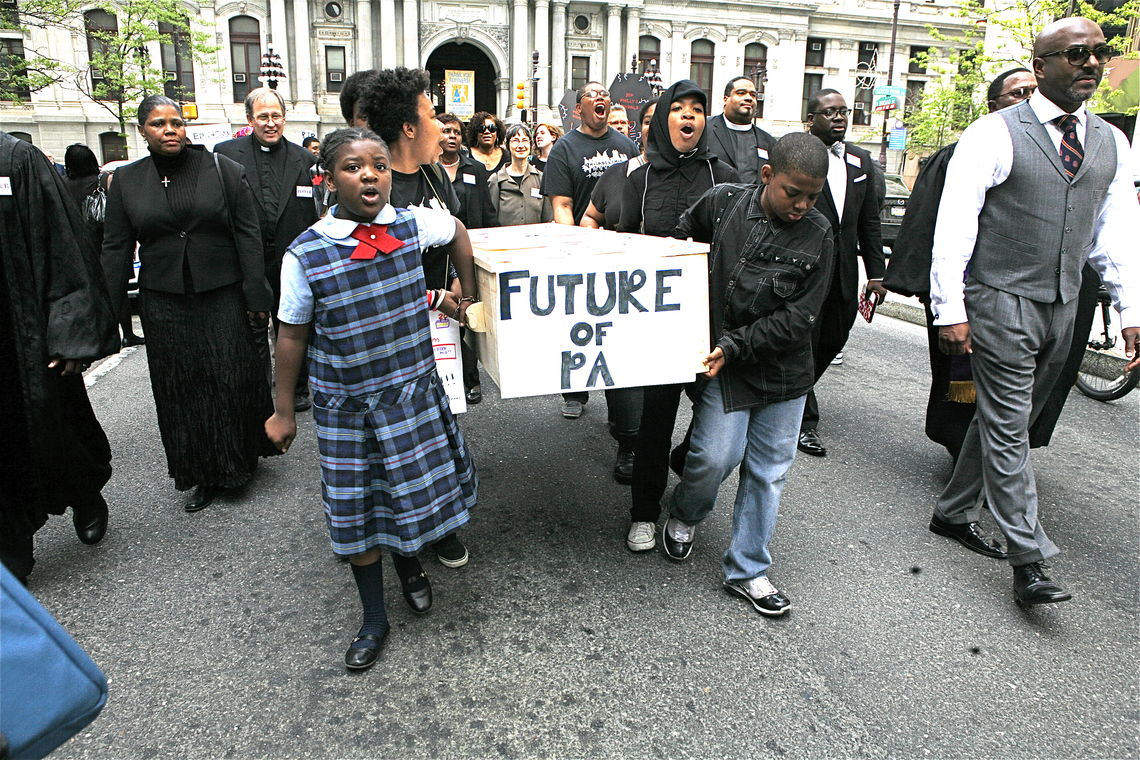 Broad coalition agrees on one thing

By POWER InterfaithJune 3, 2016No Comments

The office of a state legislator might seem an unlikely place for a prayer meeting.

But late last year, a handful of local churchgoers and an organizer for POWER (Philadelphians Organized to Witness, Empower and Rebuild) traveled to Rep. Kate Harper’s office to pray about the state’s school funding crisis.

There the education advocates told Harper, a Montgomery County Republican, that she had a moral obligation to support increased funding for Pennsylvania’s schools. Though Harper is a regular churchgoer, she said, she found the action to be a bit unsettling.

“It was unusual to say the least,” she said. “I said I would never turn down a prayer, but on school funding I want a dialogue on the issues.”

Harper said she told the visitors that while “we share the same values,” they would need to show how more money for the schools – and increased taxes to provide it – would bring better performance.

This action by POWER is just one example of how education advocates are moving to build a wider base of support for education funding, something that groups directly involved with the schools have been unable to do.

POWER, a nonprofit organization, is one of 50-plus groups that make up the Campaign for Fair Education Funding, a statewide coalition of organizations seeking more funding for the state’s school districts. The campaign was organized nearly two years ago in response to then-Gov. Tom Corbett’s cuts in education funding, which left many districts reeling from the lack of resources in everything from teachers to textbooks.

POWER members recently delivered improvised “warrants for child neglect” to legislators’ offices in Harrisburg, accusing them of failing to meet the needs of Pennsylvania students. The group’s approach may not be typical of those involved in the campaign, but the coalition’s design enables a variety of approaches to be used.

The coalition includes not only traditional advocacy organizations and education groups such as the teachers’ unions, associations of school principals, administrators and business officials, but also the state NAACP, the Pennsylvania Business Council, and United Way of Greater Philadelphia and Southern New Jersey.

“We have a field organization that is building the will for increased school funding,” said Donna Cooper, executive director of Public Citizens for Children & Youth (PCCY), one of the coalition’s organizers.

Cooper said that under former Gov. Ed Rendell, “advocacy groups atrophied” and were unprepared for lessened support under Corbett. When he cut education funding, “there wasn’t a peep out of the Republican legislature,” she said.

Without the coalition’s efforts, Cooper said, she doubted that the legislature would have adopted an education funding formula after five years of doing without a predictable way to distribute state education aid.

“Many legislators ended up supporting a formula that does not advantage their districts,” she said. “That’s a big political lift. People should not underestimate how hard that was.”

Cooper and other campaign leaders gathered in April on the steps of Philadelphia School District headquarters to applaud that the formula had been approved, but called on the General Assembly to increase state education funding next year by $400 million.

The campaign is divided into four committees – mobilization, communications, government relations, and research – and top leaders teleconference at least every other week.

Cooper and other coalition leaders said that the idea is to be able to figure out what approach will work with any given legislator. In recent months, she said, the coalition has focused on trying to reach Republican legislators, with PCCY concentrating in the suburban counties surrounding Philadelphia.

“It’s a huge state, and no single approach will be effective,” said Jim Buckheit, executive director of the Pennsylvania Association of School Administrators. “If they don’t want to deal with school officials, you need to get parents.”

Buckheit added that “This isn’t a sprint, it’s a marathon. We’re going to have a new legislature next year and we need to educate the new membership and keep the pressure on.”

Advocates say that although they may not have two strikes against them when they approach legislators, they don’t start with a 0-0 count either.

“The canvas we have to work with is not helpful,” said Joe Bard, executive director of the Pennsylvania Association of Rural and Small Schools.

As obstacles to increased funding, advocates cite a Tea Party caucus unwilling to consider any revenue increases,  the Pennsylvania constitution’s ban on a graduated income tax, and the state’s “hold harmless” provisions, which guarantee that no district can receive less money than it received the previous year, even if enrollment has declined.

This means that some legislators can vote against additional education funding and still see schools in their districts get per-pupil increases.

Despite the obstacles, advocates and some legislators are cautiously optimistic.

Democratic Sen. Daylin Leach, who represents Delaware County and Montgomery County, said that although the Tea Party caucus will resist any education funding increases, “there are enough swing votes to make a difference … but it will take complicated negotiation.”

Cooper said she believes that Republican legislators are gradually coming around to accepting that Philadelphia gets the biggest share of the pot because it has the largest number of low-income children to educate. She said Rep. John Taylor, the lone Republican in the Philadelphia delegation, had been “super, super helpful” in this area.

Cooper also said she hears less of what she calls “the waste and fraud argument,” which says that schools can get by on what they have by functioning more efficiently.

Leach said that whatever party they belong to, “what politicians want to know is that if they vote for a tax increase, you’ll have their back.”

One step at a time

Adopting the new formula only went so far, Cooper said. The budget that went into effect last month without Gov. Wolf’s signature provided a fairer way of dividing up a financial pie that is still too small. But to Cooper, this was a concession to political reality.

“You can’t do them both at the same time. You just can’t. The desire to bring home the bacon will override the power of truth. That’s just a basic of politics,” she said.

“When [the formula] is abstract, it’s easier to make the right decision. When there’s money on the table, they won’t spend it on the kids who need it.”

The coalition avoided taking a stand on the skyrocketing cost of teacher pensions, a step that cost them support in the business community.

David Patti, president and CEO of the Pennsylvania Business Council and a member of the coalition’s executive committee, said that this led to the Philadelphia and Pittsburgh Chambers of Commerce leaving the group.

“We had a huge fight,” Patti said. “And I’m still going to say we need pension reform.”

Patti said the business community is “willing to talk about the need” for increased support for education funding.

”We want to make sure there’s some accountability, some evaluation process,” he said.

“We need a value proposition. What do you get for the money? This is an input to economic prosperity.”

Harper, the Montgomery County state representative, also stressed the need for pension reform as part of an overall solution.

“Sometimes I think [education] advocates are out of touch with real numbers,” she said.

Cooper said it was simply not feasible for the coalition to take a position on pension reform.

“I don’t think our campaign has the capacity to be the monitor of that, because our campaign is so broad,” she said.

“Our coalition has been active behind the scenes getting the players to work together. We’ve been doing shuttle diplomacy. We haven’t ignored that issue.”

The coalition lost another key player in the education world when the Philadelphia School Partnership dropped out, largely because the campaign was limiting itself to funding.

Despite some departures from the coalition, Cooper said, it will press on with its narrowly focused approach of seeking to enlarge the pie and making a case for doing so.

She noted that Wolf had promised to support an additional $2 billion for schools during his first term. “We are on the warpath to get that money,” she said.

But even the additional $200 million for schools in the May budget  was a considerable achievement, she said.

This “was put on the table for education in a budget where nothing else was increased,” she said.

“That would not have happened without the campaign. The campaign has made it harder for legislators to come home without school funding increases.”

Paul Jablow is a regular freelance contributor to the Notebook.