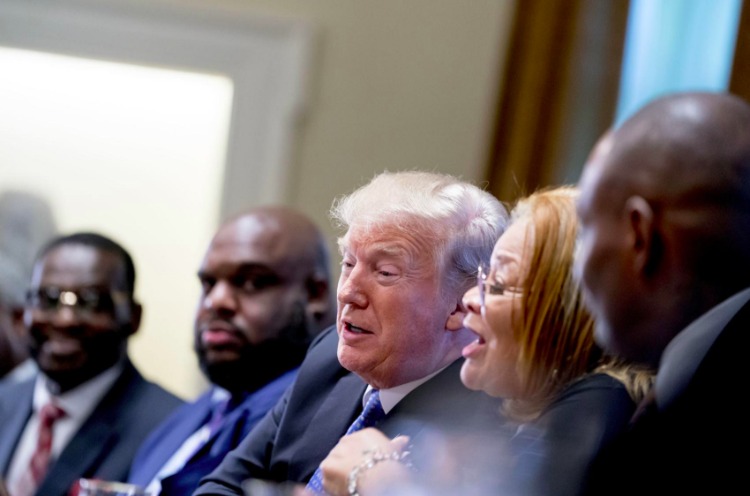 Some local clergy leaders are critical of inner-city pastors who recently lauded President Donald Trump during a recent White House round table that focused on efforts to reform the prison system.

Trump told the group, which included pastors and bishops from across the country, that his administration has been making progress on efforts to make it easier for prisoners to re-enter society and find work. Some of the pastors who attended the meeting on Wednesday are facing backlash from congregants.

Among those gathered on Wednesday was the Rev. Darrell Scott, a black Ohio pastor who was an early supporter of Trump’s campaign.

He compared Trump to his predecessor, Barack Obama, the nation’s first African-American president, and said, “This president actually wants to prove something to our community, our faith-based community and our ethnic community.”

“The last president didn’t feel like he had to,” he added, saying of Obama: “He got a pass.”

However, some Philadelphia-based pastors don’t agree with his statement that Trump is pro-Black.

In an interview with The Tribune, the Rev. Greg Holston, the executive director of the interfaith group Philadelphians Organized to Witness Empower and Rebuild (POWER) said he was very “flabbergasted” by Scott’s comment.

He said early on it became clear that the president allowed people who have white nationalistic views to have a presence in the White House.

“To call this president the most pro-black president when you allow people with these kinds of very violent, hatred-filled ideals and thinking into the White House, I’m flabbergasted that you would even say that or even think that,” Holston said.

He cited various policies instituted under the Trump administration that are adversely affecting people of color including the ban on people from certain predominately Muslim countries, the practice of separating immigrant families, promoting the use of stop and frisk by the police, Attorney General Jeff Session’s impact on civil rights and proposed cuts to Medicaid funding.

“It is just an outrage that anybody Black would say he is the most pro-Black president,” Holston added.

“There is no way that this president can be called pro-Black or pro people or color in any shape, form or imagination.”

The Rev. Kevin Johnson, pastor of Dare to Imagine Church, agrees the president should not be regarded as pro-Black.

“President Trump is probably the one who is doing the most to hurt, devastate the Black community,” said Johnson.

“If you look at what Jeff Sessions is doing to civil rights and also to criminal justice reform, it’s not moving the Black community forward, but backwards.”

Johnson said the meeting between Trump and the inner-city pastors benefited the president and hurt the Black church.

“Preachers were there are pawns, not even knowing how to play the chess that Donald Trump is playing,” Johnson said. “It was buffoonery in the fullest sense and it did not help the Black church, but it just further emphasized the lack of the prophetic voice in the Black community.”

During his campaign, Trump accused Democrats of doing too little to help urban communities and often asked African-Americans what they had to lose by voting for him.

The White House has been focusing its criminal justice reform efforts on improving re-entry, rehabilitation and workforce training programs, instead of sentencing reform, which many advocates argue would make a bigger difference.

— The Associated Press contributed to this report