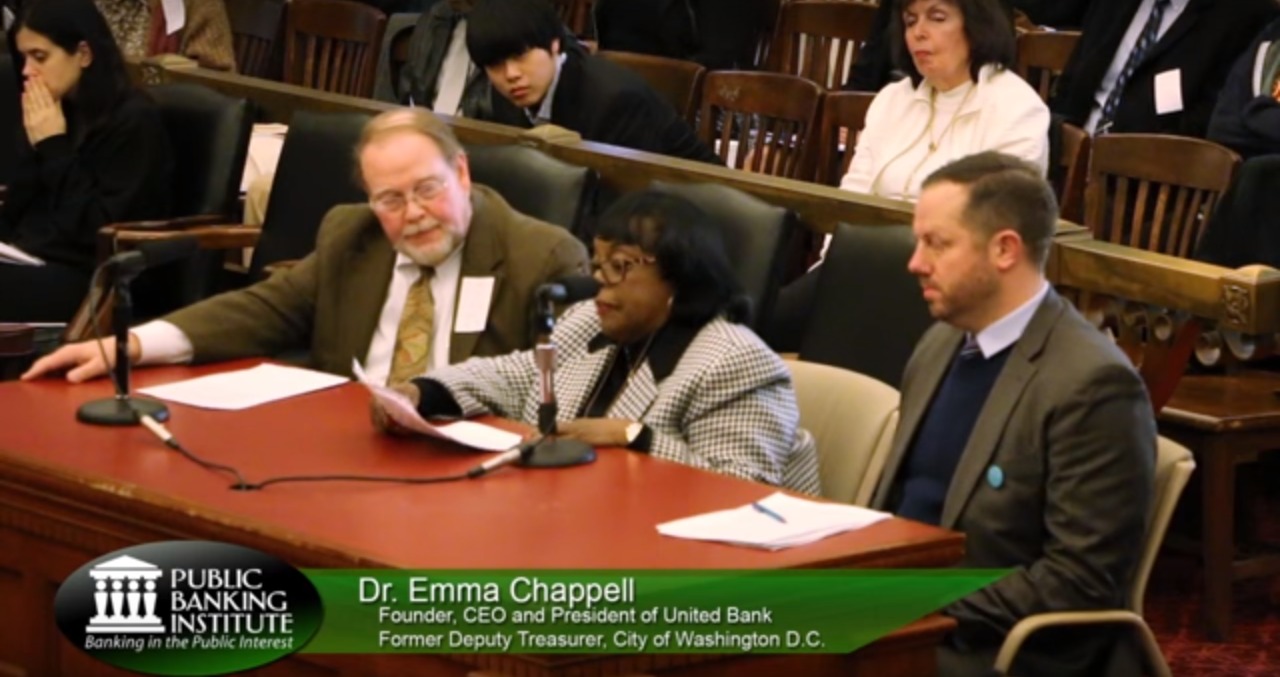 Another Revolution is Coming Out of Philadelphia: A Public Bank!

By POWER InterfaithMarch 14, 2016No Comments

Home » Another Revolution is Coming Out of Philadelphia: A Public Bank!

Philadelphia – Following a unanimous vote by City Council on a resolution introduced by Council members Curtis Jones, Jr., Derek Green and Helen Gym, a hearing was held on Monday, February 22 to begin the process of forming a public bank for the city, modeled on the hugely successful Bank of North Dakota (BND).

Similar proposals are now being discussed in more than three dozen city councils, county commissions and state legislatures across the nation.

Only weeks before, the city of Santa Fe, NM and an independent citizens committee each released a study affirming the benefits of such a bank and supporting its creation for that city. Earlier in February, a committee of the GOP dominated Arizona state legislature voted 6-1 to move forward a public bank bill.

The Philadelphia proposal is supported by a broad coalition of civic, business and neighborhood organizations whose members testified before City Council.

Anlin Wang, a recent graduate of the Temple University Fox School of Business, spoke of his perspective as a Millennial who wants to live and work in Philadelphia, saying that a public bank “can provide the affordable credit to help start-ups, businesses, and entrepreneurs; and the affordable credit for people to buy homes in their neighborhoods and not be priced out by the so called “gentrification.”Wang warned that, “Without serious action, Philadelphia risks becoming an ‘Apartheid City,’ that leaves countless Philadelphians locked out of the future of their own city.”

Veteran bankers Jeffry D. Beck and Dr. Emma C. Chappell cited the loss of community banks in the city and pointed to the success of the Bank of North Dakota in strengthening the local bankingindustry in that state to compete with the megabanks of Wall Street..

Beck and Chappell described how  a public bankpartners with local financial institutions, working within their existing underwriting standards to increase the supply of affordable credit in the local economy, create jobs and build the tax base.

The City Council resolution also noted that from their profits, public banks provide an annual and sustainable source of non tax revenue to the general fund of the people whose government created the bank.

The Rev. Carol Duncan, speaking on behalf of the interfaith group, Philadelphians Organized to Witness, Empower and Rebuild (POWER) suggested one mission of the proposed bankshould be to support the public schools with its annual profits.

In one recent year alone, the BND contributed $94 million of non tax revenue to the state’s general fund.

But an immediate impact of a public bank that many City Council members found attractive is the reduction of public debt and the resulting debt service paid by taxpayers, allowing more of municipal budgets to fund productive publicpurposes – like schools, infrastructure, health andpublic security.

A public bank,supporters note, can buy or refinance municipal bond issues at interest rates below market; or a public bank can offer a low interest loan to municipal governments and agencies in place of bond issues. In either case,public debt is reduced and whatever interest thepublic bank charges comes back to the people into their own bank, to be put to use in the local economy.

Last year the BND provided a low interest, $48 million loan to a local school district for new construction. And the bank is consolidating all student loans in the state from whatever lender,public or private, at reduced interest and longer payment terms for students.

Additionally, as one speaker observed, the publicbank can hold Philadelphia’s municipal deposits and provide banking services to the city at far less cost than the Wall Street banks that now hold the city’s deposits. A study for Los Angeles City Council reports that the annual savings could fund its entire annual budget for street paving and maintenance.

Neighborhood Networks Vice Chair, Stan Shapiro cited a litany of Wall Street abuses that, he said, “cost Philadelphia hundreds of millions of dollars,” and said that the city’s money is safer in its ownbank than on Wall Steeet, where it is at risk of confiscation in a “bail in” in the event of another Wall Street crash.

He said, “A public bank offers a game changing alternative, a  new tool to deal with public finances, a tool that adds to and does not subtract from the prosperity of the people.”

Councilman-at-large Green, a sponsor of the hearings, concluded the hearings by announcing that he would would “convene the working group which helped plan the hearings,  “to plan the next steps.”